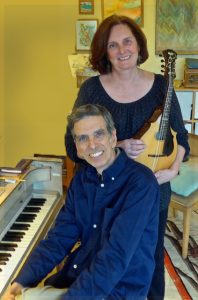 Marilynn Mair, mandolin, and Luiz Simas, piano, have been performing together since 2000. Marilynn comes from New England and a background of classical mandolin, and Luiz is from Rio de Janeiro with a background in improvisational jazz. They bonded over their love of Brazilian Choro, and been performing together, both traditional Choro and their own compositions in the Choro style, for the past 15 years.
Marilynn and Luiz perform widely as solo artists in America, Brazil, and throughout Europe, and as a Duo in New England, New York, and Rio de Janeiro. Individually, they have released many highly acclaimed CDs, and have recorded many of their original compositions as a Duo on Marilynn’s CDs, Madrugada/Daybreak (2015), Meu Bandolim (2010) and Nadando em Luz/Swimming in Light (2001).