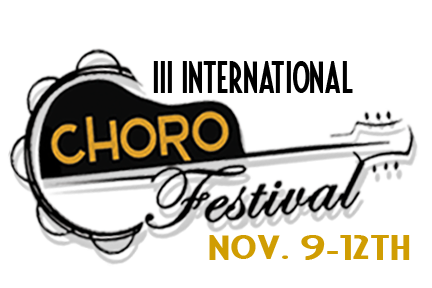 The best of Choro Music!

Sexteto Gaucho was officially formed in 2012 in the city of Porto Alegre, Rio Grande do Sul. The members initially met while playing with several other artists at different ‘Rodas de Choro’, typical jam-session style meetups for musicians who play Choro music. For the past 7 years, the Sextet has performed traditional Brazilian Choro and authorial compositions. Their musical style and sonority tends to be defined as traditional, given the interplay between the sounds of the guitar, cavaquinho, tambourine and flute solos.

Aside from public performances and shows, the group also participates in a major educational program called “Oficinas de Choro” which is sponsored by Santander Cultural and currently coordinated by musician Mathias Pinto. https://www.oficinadechoro.com.br

Lucian Krolow (Flute) – Natural of the city of Pelotas(Brasil) where it was formed Bachelor in Flute Transversal by Ufpel. He is currently professor of the Choro Workshop at Santander Cultural in Porto Alegre developing the language of Choro with Flute players in general.

Alexandre Susin/Cavaquinho/Singer, Cavaquinho player and composer, he works on several projects related to choro and samba in Porto Alegre. Since the beginning of the year, he is a teacher in the voice-choir classes at the Oficina de Choro Santander Cultural.

Rafael Pereira Lima / Alto Sax – Rafael is a Brazilian Samba Jazz Saxophonist specialized in Choro music. He got his Masters in Jazz Performance (Netherlands/NYC) at the University of Hanze. For two years was professor of saxophone and improvisation the Federal University of Brazil and has performed with many important artists including Hermeto Pascoal.  In USA, he played with the MCC Jazz Big Band, in the Far Away Places Jazz Combo and in MCC’s Improv Band. By the age of 24 years old got his classical Saxophone Bachelor degree from Institute of Arts of UFRGS/Brazil. Today Rafael is living in Rotterdam.

The Brazilian musical style of Choro represents the coming together of European melodic and harmonic traditions with African rhythms and sensibilities. Emerging in Brazil in the middle of the nineteenth century, Choro is a cousin of jazz, with a sense of yearning that is often described as a “sweet lament.” Many ethnomusicologists believe that the name Choro comes from the Portuguese verb chorar—that is, to weep or to cry. It often seems bright and happy on the surface, but if you dig deeper you’ll find a kind of sadness, a longing that Brazilians call saudade. Something about the combination of Portuguese and Italian influences resulted in melodies with a strong romantic feeling. When joined with its African influences, Choro has an irresistible groove and rhythmic momentum that is uniquely Brazilian.